The Use of Symbols in Celtic Art 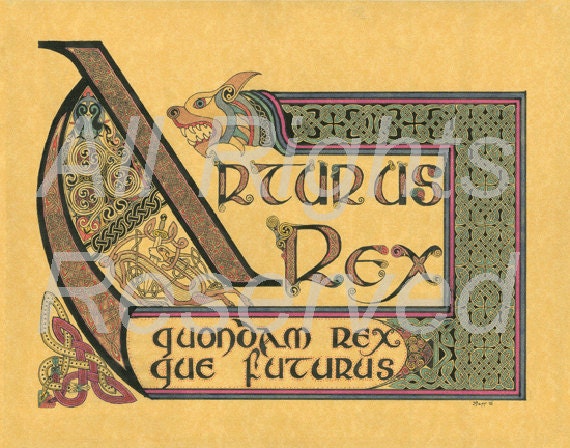 What we call Celtic art today is in large part the style and patterns first seen in the illuminated bibles of the middle ages. The patterns and styles used in those pages have come to represent the Celtic style. Artists today use similar patterns and symbols to decorate everything from fabrics and jewelry to carved stone work and leather goods.

If there was ever any meaning in the intricate knot patterns and spirals of the monks who illuminated the gospels, that meaning has been lost. There are many theories about the meanings of the various pattern work, but all we know is that the intricate work has left it's mark on modern design.

The following is a beginners primer on the terminology of Celtic symbols and design elements. The illustrations are from the work of Marcel R. Dion, a traditional Celtic artist who uses strict traditional techniques to illuminate unusual and non-traditional subjects.

The Ribbon motif in Celtic art is the one usually referred to as "knot work", and has become synonymous with Celtic Art. This pattern is actually an import however, from 6th century Byzantine Rome. The Ribbon or plait was an architectural element; but in the hands of the Irish monks of the 7th century, this design element became known as one of the most enduring hallmarks of the Celtic art style.

The example below is an intricate split-ribbon from Marcel's 'Vampyre'.

The maze pattern is another traditional element of Celtic art work. Examples can be seen throughout the bibles of the middle ages. This example is from the Christmas card for 2004 by Marcel R. Dion.

The spiral pattern is one of the oldest motifs in the Celtic art style. Examples of spiral patterns can be found as far back as 3rd century BC in Britain and Ireland, and the 4th century BC on continental Europe. The spirals found on illuminated text volumes are the scribe's attempt at copying onto Vellum the fascinating metal work of earlier times.

One element of the spiral pattern, the small Almond shape in between the confronted trumpet pattern, was usually enameled in early metal work. This is a signature of spiral pattern use.

The zoomorph is a traditional element of Celtic art. Fine examples can be seen in the Books of Kells, Lindisfarne and Durrow. The zoomorph is an animal form used in a decorative pattern.

The example below is from Marcel's "Arthur". The interwoven dogs are a good example of a traditional element in Celtic pages.

The wolves from Marcel's "Werewulf" piece are an example of a traditional element in Celtic art being used in a very non-traditional way. Here, the zoomorphs are not just decorative, but are actually elements of the 'story' of the piece.

The rat zoomorph from Vampyre.

The rat zoomorph from "Vampyre" (above), by Marcel is another example of using this traditional element to add mood and story element to this non-traditional art work. The style here is quite traditional, but the subject matter is completely new for this genre.

Previous Post Choosing Jewelry for your Biggest Day - your wedding!
Next Post Victorian Mourning Customs and Etiquette
0 items in your cart