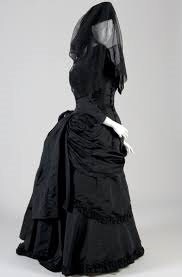 Crape on the Door

"Ring the bell softly, There's crape on the door."

Black crape tied with white ribbon is placed upon the door or bell knob, as an indication that the dread visitor has entered the home, and borne away another prize. This should deter the caller from ringing, if it is possible to bring the attendant to the door without doing so. No one knows save those who have passed through a sorrow, how the clang of a bell, with its noisy reminder of active life, jars upon the nerves. In many houses, the hall door is left ajar, that friends may enter quietly. The kindly instincts of the heart tell them to speak softly, and be helpful and sympathetic. White crape looped with white ribbon is appropriate for a child or young person. For the aged, black crape and black ribbon are used.

There are many who do not believe in wearing mourning at all. Such have a right to refuse it as it concerns no one but themselves. On the other hand, much can be said in favor of the custom. A mourning dress is a protection against thoughtless or cruel inquiries. It is also in consonance with the feelings of the one bereaved, to whom brightness and merriment seem almost a mockery of the woe into which they have been plunged. With such, garments of mourning are "an outward sign of an inward sorrow," and they cling to them as the last token of respect and affection which they can pay the dead. 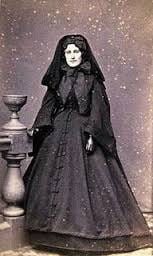 How long must mourning be worn?

Sometimes the bereaved ones send cards announcing their loss to friends. It is far less harrowing than to write, especially when one's circle of acquaintance is large. They should say very little. 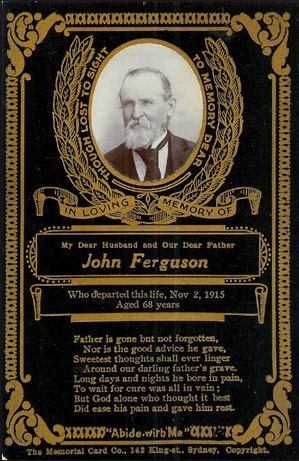 Gentlemen or ladies in mourning use black-bordered cards and stationery for their social correspondence, until the period of mourning expires. The width of this border is a matter of taste. But if they write any letters upon business, they use plain white stationery.

A person in deep mourning does not go into society, or receive or pay visits. Neither are they found at the theater or other public places of amusement, unless it is a musical or concert, for six months. Formerly, a year's seclusion was demanded of a mourner; as also was the fashion of wearing purple, or "half-mourning" on leaving off deep black. There are some natures to whom this isolation long continued, would prove fatal. Such may be forgiven, if they indulge in innocent recreations a little earlier than custom believes compatible with genuine sorrow.

It is not in good taste to attend a funeral in gay colors. You are not expected to assume mourning, but nearly every one has a plain, dark suit that is less noticeable.

Note: If you are unsure of the level of mourning or duration that is appropriate to your loss, it is recommended that you consult 'The Queen or Cassell’s' or a similar manual.